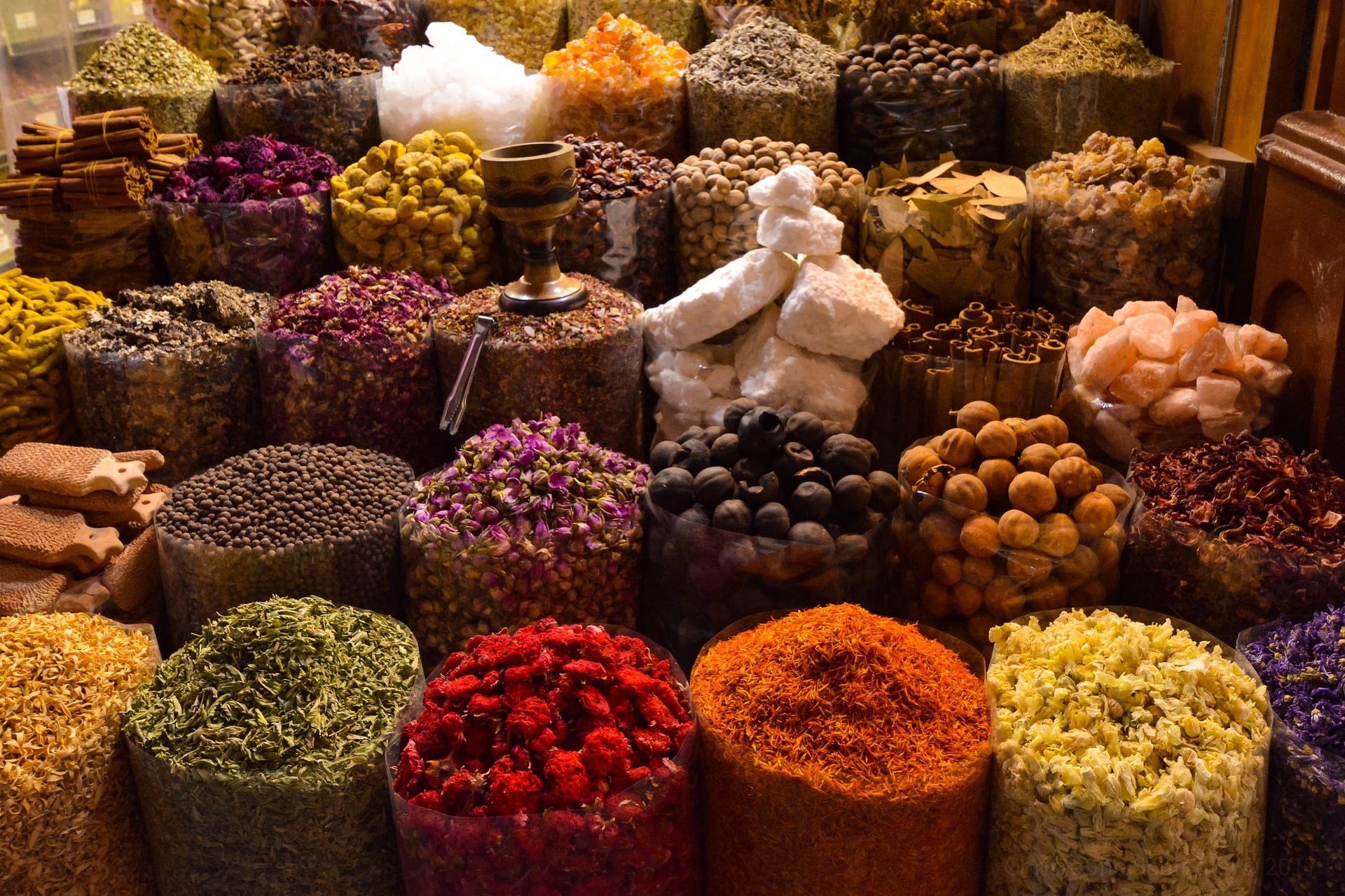 When most people think of Middle Eastern cuisine, their minds automatically go to dishes such as hummus, falafel and pita bread. But there is so much more to it than that, and recipes across the region vary from country to country. Even within the Arabian Gulf (locally called the Khaleej) – an area comprised primarily of the UAE, Bahrain, Saudi Arabia, Kuwait, Oman and Qatar – you’ll find the cuisines differ.

In the Emirates, it all stems from three main diets: the Bedouins’, fishermens’ and farmers’, encompassing a range of natural ingredients such as meat and camel milk, hammour and shrimp, and plenty of dates. Today, this translates to dishes like harees – cracked wheat with chicken – or balaleet – a breakfast of sweet vermicelli pasta topped with an omelette – and luqaimat, a fried dough dessert.

Traditionally, these dishes were cooked in Emiratis’ homes, and as the local population in the Emirates is much smaller than that of the expatriate community, it stayed that way for decades. The dining scene was primarily made up of international restaurants, and those that catered to expatriates’ native cuisines, from Indian to Italian and everything in between. In the past few years, however, Emirati cuisine has been enjoying somewhat of a renaissance, with new eateries popping up, serving both authentic dishes and modern interpretations of the staples.

Curious tourists and residents can enjoy a traditional breakfast, lunch or dinner, as Emirati presenters teach them about the UAE’s rich history and heritage. Enjoy traditional Emirati cuisine, conversation and interactive cultural experiences inside the traditional houses of Sheikh Mohammed Centre for Cultural Understanding, located in one of Dubai’s oldest communities, Al Fahidi Historical Neighbourhood. Guests can expect to taste traditional food and learn about the Emirati culture. The 90-minute experience also includes a tour of the local area, whether that’s Al Fahidi Historical District or Jumeirah Mosque. Don’t miss out on learning more about the culture with a question-and-answer session at the end. 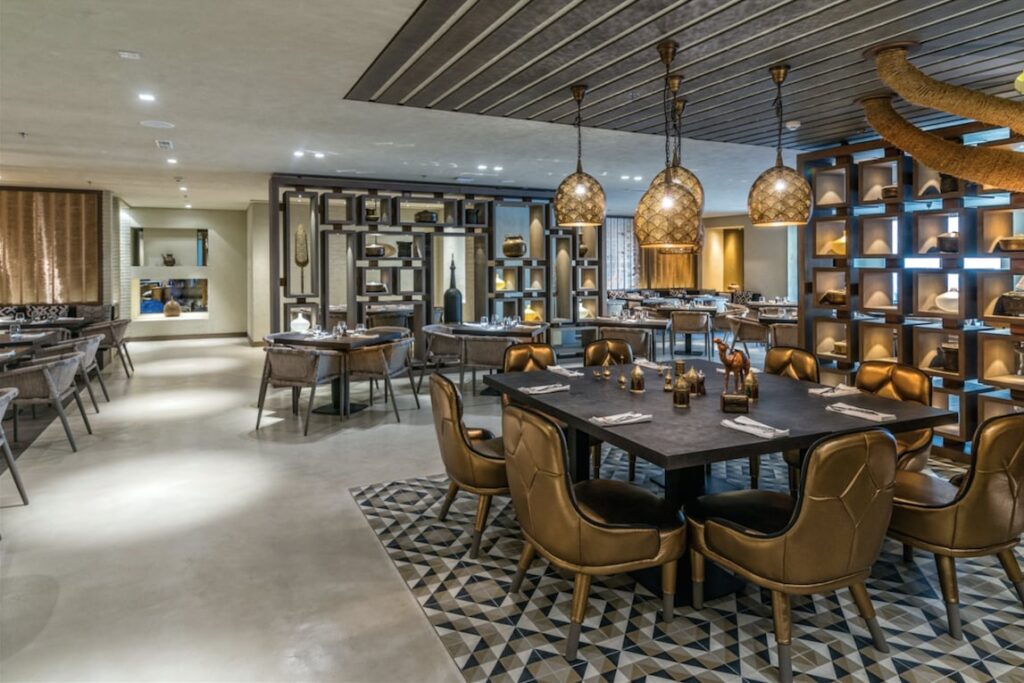 The chefs at Aseelah, which is based in the old part of Dubai, at the Radisson Blu Hotel Dubai Deira Creek, take inspiration from the past and create entirely new dishes with modern flair. For instance, on the menu you’ll find a pan-roasted quail salad stuffed with pistachio, an Arabian-style soup made with slow-poached
sustainable seafood, and home-smoked rack of lamb covered in saffron-cardamom gravy. A trio of camel sliders served with a variety of sauces also feature – and it’s a popular dish! Sip on their refreshing cocktails like Desert Safari, Emirates Oasis, or, Ginger Spiced Tea. Seafood and vegan options include, Kale Salad with Date, Rocca Salad and Maleh Salad. Whilst no meal is complete without satisfying your sweet tooth with dishes like Arabian Nutty Cake, Chocolate Cardamom Cheesecake and Date Pudding. The stylish contemporary setting merges old-style Arabic touches with modern design concepts. And to top it off, enjoy watching belly dancing
performances and having shisha from the comfort of the glamorous glass terrace.

This trendy and casual restaurant in Box Park is a must-visit for its contemporary, authentic food and edgy interiors that feature camel motifs, traditional Khaleeji architecture and palm leaf patterns in every corner. Khaleeji cuisine is prepared daily and the menu boasts fusion offerings like the Logma Benedict, with poached eggs in shakshouka sauce served on mini khameer bread and topped with hollandaise and
Khaleeji spices. Paratha (fried flatbread) served with cream cheese, hot sauce and Chips Oman (a popular brand of crisps in the region) is also a not-to-be-missed dish. 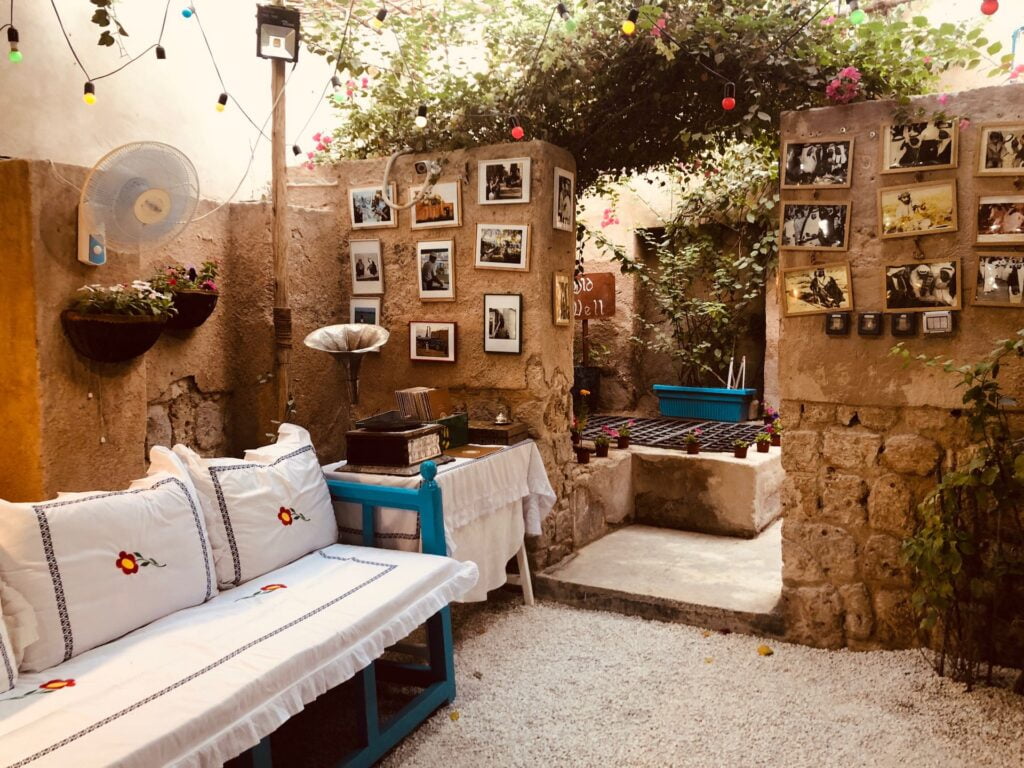 A journey into Dubai’s past could well begin through the door of a quaint tea house in the Al Fahidi Historical Neighbourhood, once known as Al Bastakiya. As you step into the Arabian Tea House (although old-timers would still prefer to call it the Basta Art Café), you are transported into the old times – a stone house with wind towers, turquoise benches, white rattan chairs, lace curtains and beautiful flowers surround
you –  enjoy your cup of gahwa (traditional Arabic coffee) in the shade of an old tree while the languid air swoons around you in the middle of a lazy morning or peaceful afternoon. This old-world charm is one of the few authentic examples Dubai has of a life gone by, when her people would meet and take refuge in tea houses, not just to escape the heat of the day but to bond with each other, relax and talk business. It opened in 1997 and remains an oasis of peace and calm where tourists and locals come, time and again, to journey back to the city’s past and explore its cultural heritage. As for the food, enjoy the medley of Arabic salads, pastries, Emirati hot and cold appetizers and meat dishes. And, not to mention, the selection of beverages,
traditional sweets and kid’s options.

Emirati restaurants have always stuck to their classic hits, but Ana reimagines beyond the regular roots and can be easily considered as a modern Emirati restaurant. Ana elevates the dining experience with creative cooking, blending different worlds together to create unique dishes. Food is actually a work of art here
and Instagram worthy. They have introduced new dishes by experimenting with recipes to give diners a modern experience. You need to try Mbahar Lamb, slow cooked lamb shank in creamy curry sauce with saffron rice, fried mixed nuts and onions. The interiors are chic and sleek, but very comfy and it’s conveniently located in The Dubai Mall which means you can get to shop before or after as well. It’s also
the first restaurant that offers perfumes to sample at the end of your meal. Fragrance is actually very much part of Emirati tradition. Applying some scent on skin and clothes, before leaving home, is a long-standing ritual and a great touch to the cultural experience dining there. 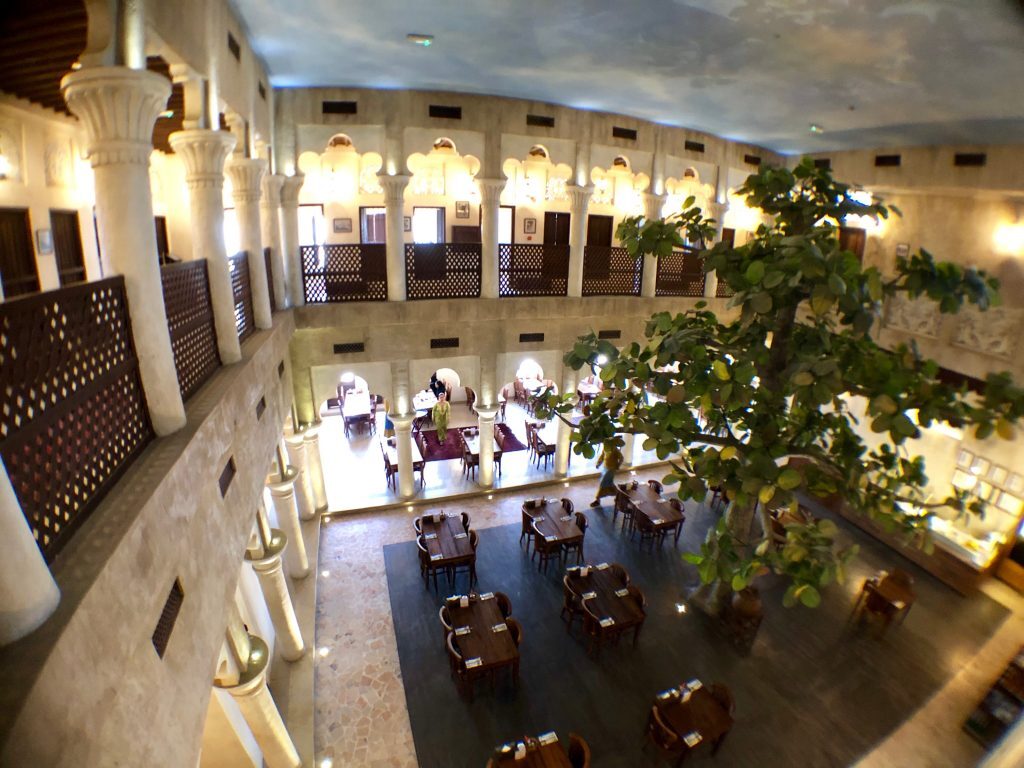 There are three in Dubai, the first was launched in Dubai Festival Hall several years ago. The next was in Al Barsha Pond Park overlooking a beautiful view of the park, with a seating capacity of more than 500. In fact, this one is considered the biggest seafood restaurant in UAE. The latest branch is in Al Seef on Dubai Creek where modern Dubai meets its traditional counterpart. They also recently branched out to London, next to Gloucester Road tube station in south west London. Al Fanar is best known for its décor having an ambience of Dubai in the 1960s. The décor reminisces a bygone era when tents, barasti huts and clay-built homes housed fishermen, pearl merchants and Bedouins. The style of the restaurants revives memories of Dubai when it was a small town on the shore of the Arabian Gulf. The authentic Emirati cuisine shares similarities with Indian and Persian cuisines. Enjoy a hearty Arabic breakfast tray that consists of dishes like eggs sunny side up, nashif (ground beef with spices), shakshuka (scrambled egg with tomatoes and peppers) and chebab (Emirati pancakes), grilled seafood, kebabs, soups and salads. Tuck in to tantalising
sweets consisting of mainly dates, saffron and cardamom dishes.

In Wafi Mall, Khan Murjan restaurant is in the heart of a traditional souk. Inspired by an infamous ancient subterranean souk, in Baghdad, it draws on all four corners of the Arab world, with influences from Egyptian, Syrian, Turkish and Moroccan architectural styles. The focal point is the marble courtyard and the Umawi architecture which provides a stunning backdrop to the social hub of the souk, where people can gather for breakfast, lunch or dinner. The open roof brings in a beautiful breeze in the cooler months, but it’s designed in such a way that it’s quite pleasant even in the summer months. The restaurant serves food made from the freshest ingredients using traditional cooking techniques to create a menu that offers delicious authentic Arabic dishes. Try the Turkish lentil soup, sheesh tawook, fattoush, falafel, and warm fresh breads. Juices are fresh including the sugarcane which is sweet without added sugar. 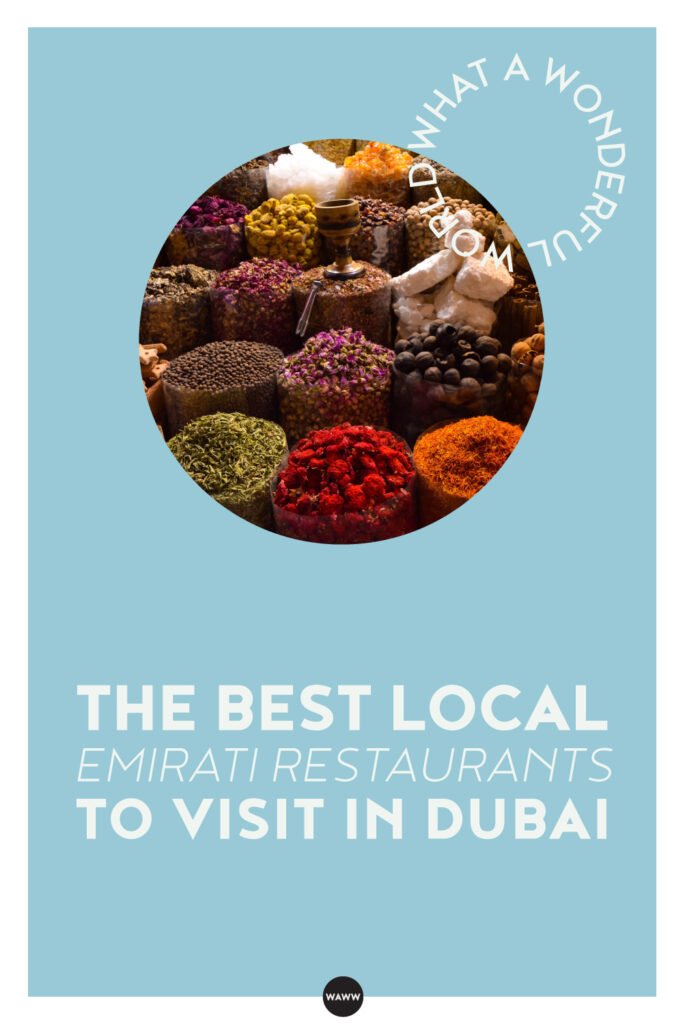 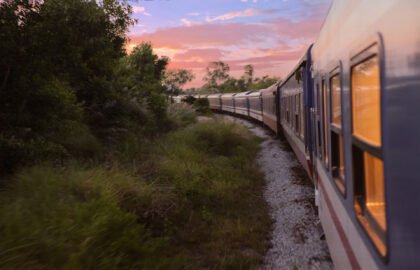 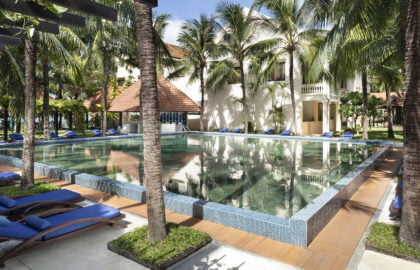 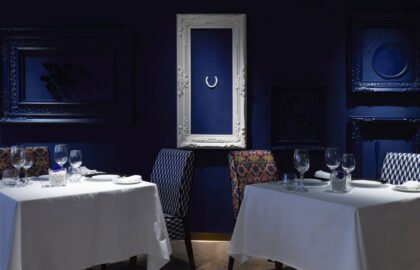 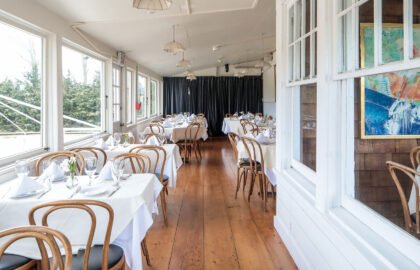